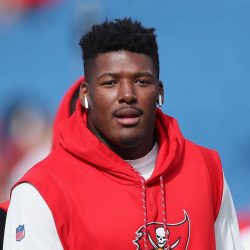 On Thursday, current NFL Free Agent Ryan Russell, in a powerful essay published on ESPN, came out as bisexual.

Russell is one of only a handful of professional football players to open up about their sexuality in public, and only the second to do so while still considered active, the first being Michael Sam, who never played in the regular season.  Russell has played three seasons in the NFL, with the Cowboys and Buccaneers.

Full disclosure: I haven’t followed the NFL in ages, mostly because when I really followed the sport, players were making at best six figures.  Now, players make millions, but worse, team owners make billions but still hold cities and states hostage to pay for as much of the team’s expenses as possible, and then don’t pay any taxes.  I won’t even address racial politics.

I cannot speak to Ryan’s skills as a player, but I am certain that were his name Tom Brady, he would never have made free agency, and the team would be spinning the announcement to their benefit.  At least on the surface.

Teams won’t stand for anything that could potentially bring any negative publicity to their franchise specifically and the league in general.  For at least a brief period.  It’s why wife beaters, murderers, and child abusers remain in the game.  Fans who scream for the head of an opposing quarterback seem to be able to brush away the violent acts of their heroes with nary a care.

But turn against God and/or Country (Hello, Colin Kaepernick) and your career is basically over.  Especially if you’re a player of color.  (Note that quarterback Josh Rosen, a white quarterback, was still drafted in the top ten in 2018 despite being openly atheist.)

Michael Sam and Ryan Russell are the only players to come out as LGBTQ while active, and while Sam did still get drafted and played a few plays in the preseason, he never played in the regular season, and now…

Now the test for the NFL begins.

Can the NFL, a league built on uneasy social politics off the field, get past its own obsolete nature and bring Russell back into it’s fold?  Can the league risk a percentage of fans being angry over an active LGBTQ player against the possible growth in LGBTQ fans?

And what would happen if Russell gets a roster spot, keeps it, and other active players feel emboldened to come out themselves?

Basic maths alone support the notion that there are roughly 150 players in the NFL that would identify as LGBTQ if they felt safe enough to do so publicly.  My guess is that half of them are already known to their teammates, and just as so many white teammates supported their black teammates over the kneeling protests, more than half of players would support their LGBTQ teammates coming out.

It is true that right now hatred and hate crimes is a very vocal component of modern society, but do keep in mind, that just means they are the loudest.  They aren’t the true majority.

Russell is showing tremendous bravery in coming out while actively looking for a team to hire him, allowing him to continue to play the game he loves.

It is now up to the rest of the league’s players – NOT the NFL because we all know the league organizers and owners are a bunch of jackasses out for a buck and nothing else – to come out too.  Not as LGBTQ, but as allies.

As it did when our nations were Allied against Nazis for a free world, our people must be allied for a socially free society. That is Ryan’s hope…and it should be for all of us.