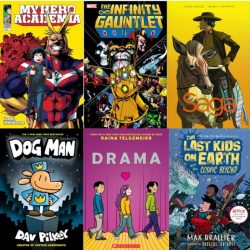 If you listen carefully, you can hear the low wailing from the wings: Comics are dying!

Old filmmakers are lamenting the lack of artistry in superhero films.  Monthly comic book sales are stagnant.  No one cares about comics anymore!

And, to a point, those voices are right.

Comic book films are meant to be fun, adrenaline-filled rollercoaster rides, giving audiences a couple of hours of pleasure watching people far better than anyone we vote for doing what’s right – and punching Nazis along the way.

It’s easy, and uplifting, to cheer Steve Rogers calling for Mjolnir, and then using it to beat up Thanos for a bit.

Try getting an entire theater to join together and cheer on Antonius Block while he battles the Angel of Death at chess.

As for comic book sales of late, they don’t bear scrutiny when you examine printing practices which are holdovers from the 1990s, a period that nearly shuttered Marvel Comics.

However, those same voices are in fact, very wrong.

Current complaints about comics are an odd mix of complaints, from retailers (with valid concerns about their livelihood), readers (most of whom are complaining about the demographics of creators or creative choices regarding favorite characters), and even creators (dealing with people devaluing art to the point that they find no problem stealing works online which does cost creators).

(Oddly, I keep thinking of the Cher tune, Gypsys, Tramps, and Thieves.)

Let me address those complaints about the number of female creators, creators of color, LGBTQ creators, or any other creators that aren’t middle-aged white males.

If you are reading comics about super heroes and your knickers are in a twist because a woman is writing Aquaman, or a black man is writing Captain America, then you have completely missed the point of heroes in the first place, and you are not welcome in comic fandom.  And if you haven’t figured out my politics through my writings or through several of my characters, I’m not a creator for you either.

Now the bad news for you.  Women and creators of color and LGBTQ creators are saving comics!

As the wonderful writer Amy Chu consistently reminds us, comics are a medium.  Not a genre.  Superheroes may dominate the mainstream, but in actuality, superhero comics make up maybe a fifth of all comic sales.  If they’re lucky.

Don’t believe me?  Tom King is a fantastic writer and wonderful human being, but how many of his Batman books have made it onto the bestseller list?

I was a comic book shop retailer for nearly ten years and what will eventually kill off comic books if the fans don’t fix this problem is the fans themselves.  Fans have to stop being so myopic about the stories being told, otherwise the three or four thousand comic shops in the country will soon become – at best – three or four hundred.  The handful of major comic book publishers will more than likely just start publishing digests (just like Archie did ages ago) for grocery stores featuring reprints and the occasional new story just to maintain copyrights to hold onto intellectual property for films.

Meanwhile, Raina Telgemeier and Dav Pilkey, along with many other comic artists, create graphic novel after graphic novel that hold audiences worldwide rapt in attention.  These books feature characters that run the gamut of demographics of skin color, gender, or any other demographic you can think of.  However, it is not just this diversity that is the reason for the success of these books.  They are also brilliant stories brilliantly told, capturing the attention of children and adults.

Simply put, these creators are making good stories that resonate with far more readers than the same old Superman beats up Lex Luthor books the superhero publishers really hope we never get tired of reading.

Huge sales numbers in mainstream comics now rest on a tired gimmick from the 1990s: variant covers.  Without it, cracking 100,000 units is nearly impossible.  Those numbers really haven’t changed in some 20 years.  Which should make it obvious: mainstream comics are stagnant.

Meanwhile, any one graphic novel by Telgemeier or Pilkey easily sells in the hundreds of thousands.  In 2016 alone, Telgemeier’s books sold roughly 1.5 million copies, and more than 5% of all graphic novel dollars came from her books. And most of those were books from 2014 and 2015, as her only release for 2016, Ghosts, was released in September.

Yes, you read that right.  Four Raina Telgemeier titles as much as two years old were outselling any new comic book or graphic novel the entire year of 2016.

Comics are not dying.

Superheroes are simply not the standard anymore.

What is changing is the domination of the medium by the fewer than 100,000 collectors who cannot figure out that the medium is growing without them, beyond collectors and investors.  Beyond capes and cowls.

Other nationalities, skin colors, and genders in creators, characters, and readers? That is the new mainstream.

It’s up to the stubborn shop owners and long-time readers to stop wasting time complaining and embrace a widening audience that is the new normal, like it or not.