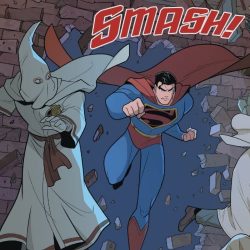 In 1946, writer and activist Stetson Kennedy had just left the Ku Klux Klan after spending some time undercover infiltrating the group.  Wanting to put his discoveries to good use, he contacted the producers of The Adventures of Superman, the popular daily radio serial.  Looking for a new villain after the war, producers jumped at the idea.  Soon, a 16-part serial was produced, The Clan of the Fiery Cross, to huge ratings.

The KKK boycotted sponsor Kellogg’s and protested radio stations, to no avail.  The storyline exposed rituals and code words, and by the time the last episode aired, recruitment numbers had plummeted to virtually nothing.  Superman had effectively taken down the Klan.

Nearly 75 years after the first broadcast of the Clan of the Fiery Cross, writer and artist Gene Luen Yang adapted the storyline into a three-part mini-series for DC Comics.  Working with artist duo Gurihiro, letterer Janice Chiang, and editor Maria Javins, Yang has created a version of the radioplay that is both far superior to its original work and essential for today’s readers.

In the story, a young boy named Tommy Lee, has just moved to the neighborhood from Chinatown when his father got a job in the city health department.  Lee joins the Unity House baseball team and hits a teammate, Chuck Riggs, during practice.  Riggs, who lost his pitching position to Lee, forced Lee to hit him by crowding the plate.  Riggs’ uncle Matt finds out and uses the incident to incite his followers – the Clan of the Fiery Cross – to action.  Team manager Jimmy Olsen gets his friends Clark Kent – and eventually Perry White – involved.  Soon, Superman is going after the Clan just as the Clan is going after White and the Lee family.

As you would expect of a cliffhanger serial of the time, the story is very male-centric.  Tommy Lee is given a good amount of airtime, but thankfully he isn’t treated as a stereotype.  There are no vocal cues to suggest his ethnicity, unlike his father, who is played a little like the film detective Charlie Chan, but not as extremely.  Neither are reduced to using “pigeon English,” or other common stereotypes of the era.  However, aside from being mentioned, we never hear from Tommy’s mother or sister, and Lois has a limited role in the story.

In adapting the story for comics, Yang made two choices that escalate his story to heights the original could only aspire to.  First, he kept the story set in the post-war setting of the late 1940s.  Second, he made Tommy’s mother a bigger character and – in a stroke of genius – made Tommy’s little sister Roberta the narrator and central character.

In the radioplay, Jimmy and Tommy are the main characters, but by shifting that narrative to Roberta, Yang allows for an indirect commentator to emerge to both the events and Tommy.  Yang has created a story that is full of so many layers that, in the hands of any other writer, would have toppled under its own weight.

Yang weaves in some of his own family history into the Lee saga, giving readers a glimpse into the Chinese immigration experience from both sides.  Roberta watches her brother alter his behavior from her family to the Unity House, which confuses her initially.  Soon, she realizes what is going on, which eventually leads to a wonderful interaction with Superman.  She also has some wonderful scenes with Lois, whom Yang brings into a larger role, mostly because of Roberta.

Yang has also woven in a subplot involving Clark learning more about his own heritage, done in such a way that it not only moves the overall story forward, it interweaves flawlessly.  He has also made one very important change to a key Superman character form the radio and TV series that adds to the impact of the overarching theme of alienation and racism.

Yang portrays the Clan in just the proper light: Evil.  They are the villains and there is no nuance to them.  But he also treats some of them in a certain way that later on hammers home the virulence in which the Clan can infest people, decent or otherwise.

Yang’s story is given a gift with the pairing of Gurihiru on art.  Gurihiru is the collective name for a pair of artists from Sapporo, Japan, who have worked on comics such as Power Pack and The Unstoppable Wasp for Marvel, and Avatar the Last Airbender for Dark Horse.  Their work gives this story a vibrancy and brings life to the page and complements Yang’s story perfectly.  Their Manga influences also bring a fluid and dynamic design to the pages, giving a greater sense of motion and urgency to the panel flow.

Janice Chiang is a longtime letterer, having broken into comics with Marvel, and most recently working on DC’s Super Hero Girls line.  Her font choices and dialogue placement compliment the artwork, and enhance read-flow nicely.  Her effects work is dynamic and never disrupts the scenes.  Overall, it’s a near-perfect package put together by Javins.

(I do have two minor complaints with the overall book: one is that the smaller 6×8 form factor means the art is just that much smaller, when it’s so good it deserves a larger size.  The other complaint is due to my old eyes: the font size for the photo captions in the post-story essay by Yang is pretty tiny.  But, those are minor, and really just my obnoxious nit-picking.)

The radioplay was dramatic, and somewhat over the top, but in 1946 necessary to reinforce the ideals we went to war in Europe over. With Nazis openly marching in the streets of Washington, DC and other cities across the country, and with people exercising racism because of an inappropriate slang term for Covid-19, Gene Luen Yang’s SUPERMAN SMASHES THE KLAN is not just welcome entertainment, it’s vital reading for all.

The ICRVN is an affiliate of, and recommends, BOOKSHOP.ORG for the purchase of physical copies not available through comic shops. A portion of all sales via Bookshop populates a fund benefiting family-owned small bookstores nationwide.

To find this series, contact your local comic shop!

Below is an embedded Youtube video of the entire 1946 16-part “Clan of the Fiery Cross” storyline from The Adventures of Superman radio show. To purchase an MP3 collection of all four storylines in which Superman battles hatred and Klan groups, go to https://www.otrcat.com/p/superman-fights-the-kkk.