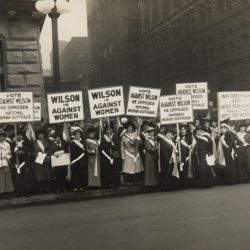 Every so often I believe we may be at a turning point.  At one point, there were as many as six women running for president as a Democrat.

Six, in a field that numbered as many as 29.

(For the record, all three remaining old white guys we get to choose from are all bad choices, and I’ve followed both Dems for long enough to base that opinion on more than just random personality quirks.)

All of that complaining being thrown at the former candidates is not coming from Republicans, or old white guys.  It’s coming from women.

Now, I have to say that I already believe that equality is ages away, because we were far readier for a black man as president than a woman.  I know Hilary won the popular vote, but the system is designed from the bottom up to ensure elections go a certain way – Wall Street’s.

Do I like Hilary?  Not particularly – I always have this nagging feeling that she would put her own ambition before helping a poor person.  But I believe that of almost ALL politicians.  I believe far worse of many of the Republicans in the Senate, just so you know.  Pay attention to Yertle the House Speaker Turtle and you’ll see just what outside monies from corporations who don’t want to help anybody not already a billionaire does to our government.

Back to the recent candidates.

Men in general are not comfortable with the concept of a female president, and it really seems like other women aren’t either.  (I am speaking collectively, of course.  Warren, Gabbard, et al have hoards of female supporters, but remember that a large chunk of women voted for Trump instead of Clinton four years ago.)

There is a glimmer of hope, with young women like AOC and Ilhan Omar, Rashida Tlaib, Ayanna Pressley.  Despite the current administration and the press’ attempts to paint them as subversives, they represent the future.

And that future is not white nor male.

Unfortunately, as this current election shows, like Charlton Heston and his guns, old white men are going to hold on to power until its pried from their cold, dead hands.

I hope it happens sooner rather than later.  I hope that women stop bickering and cross party lines, and stop letting men in authority (elected officials, teachers, priests, bosses, whatever) dictate their future.  I hope that women stop fighting amongst themselves (Hey, Bravo!  “Real Housewives” shows aren’t helping!) and turn that fight towards an antiquated system that still believes that anything not white or male is property.

A system that has yet to ratify the Equal Rights Amendment, first proposed in 1923.

A system that still pays women roughly 70% what it pays men for the same job title (even though women are often given more work).

1919 was a watershed moment in women’s history in our country.  We cannot let it dry up from neglect.