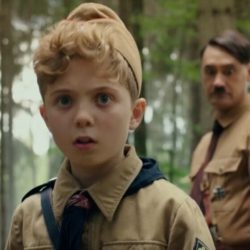 One can only hope that people did not go into JOJO RABBIT expecting WHAT WE DO IN THE SHADOWS or THOR: RAGNAROK.  Over time Taika Waititi has been working to establish himself as a bit of an absurdist, able to adapt his sense of humor to any genre.  However, JOJO RABBIT firmly establishes him as a master craftsman, able to meld that absurdity with scathing satire, less than subtle modern commentary, and heart-wrenching drama.  Apparently, all while dressed as Adolf Hitler.

JOJO RABBIT is the story of a young boy in Hitler’s Youth trying to figure out his place in the world, with the guidance of his best friend Yorki, his mother Rosie, and his imaginary friend Adolf.  I’m sure you’ve seen the trailers, so I don’t need to remind you which Adolf, or that this is the role Waititi chose for himself.

While working out his place in the Youth, we learn that Jojo’s sister died recently, and his father is missing, either as a deserter to the army, or possibly died during combat.  While we never find out just what it is that Jojo’s mother does, Scarlet Johansson portrays her as a strong, yet troubled woman who wants as much for her son’s future as she does for her country.  Only through a few careful threads do we learn how she feels politically.

Until we meet Elsa.

Elsa is a young Jewish girl hiding in between the walls in Jojo’s house, a discovery that freaks out young Jojo – and really freaks out imaginary Adolf.

Johansson is seldom on screen during this time, and the main crux of the film is Jojo interviewing Elsa for information about Jews (what they eat, do they sleep like bats, the normal question young Nazis ask), and then discussing his findings with Imaginary Adolf.  Jojo then spends time during his day job – posting flyers and delivering conscription letters – asking people about Jews and what happens to them, and to the people who find or hide them.

Without a father figure present, Jojo is constantly on the search for one, either actively or passively.  One such figure is the aforementioned Imaginary Adolf.  Another is Jojo’s boss, Captain K, who offers an odd mix of war stereotypes – the world-weary yet gung-ho commander, the compassionate leader, and the fanatical true believer – all rolled into an interesting if confusing pastiche.  A third, albeit briefly potential father figure, is Stephen Merchant’s Deertz, based somewhat on Ronald Lacey’s Toht from Raiders of the Lost Ark, with the added bonus of Merchant’s tall frame.

Waititi may be known for his absurdist humor, but perhaps this film will also elevate his reputation for being a true film director.  Young star Roman Griffin Davis as Jojo (and fellow freshman actor Archie Yates as Yorki) are fantastic throughout this film.  Davis handles a wide range of emotions and situations like a seasoned young actor, and at a couple of key moments, we feel his emotions. The character of Elsa is on the other end of the spectrum, played by a young yet quite experienced actress, Thomasin McKenzie, and she is simply fantastic. She plays Elsa with just the right balance of sarcasm, cynicism, and emotion, and it never feels disingenuous. There are also a couple of important moments, one with Johansson and one with Sam Rockwell as Captain K, that show both their abilities, but also how well Waititi can craft a moment for an actor.

Waititi also handled certain scenes and moments with the appropriate amount of restraint.  Watching JOJO I could start to understand more – like you might watching Monty Python episodes having studied the troupe’s writing habits – what parts of WHAT WE DO IN THE SHADOWS were Jemaine Clement’s writing, and what were Waititi’s.  Clement tends to push envelopes regardless of what’s going on, whereas Waititi will push a situation as long as it serves a narrative but stop or even pull back a bit when it better serves the emotion of a moment.

It’s that more delicate touch at the right moment that gives JOJO such power and importance beyond the chaos and absurdity presented in its trailers.

JOJO RABBIT is a rich, and oddly vibrant work that treats every moment carefully.  It’s not at all like RAGNAROK, in which nearly every moment had to include some nod to the fans, or even SHADOWS, which required something quirky or ridiculous in every scene.

JOJO is a quilt woven of so many different stories that it is astounding Waititi makes them all work.  JOJO is a story about a young boy finding love for the first time, a story of a young boy trying to figure out what love of country means, a story about a boy trying to find his place in the world, plus cautionary tales about love, nationalism, cult of personality, war, friendship, trust, and even weaponry.

The performances are solid throughout, and the story flows nicely and with just one small exception, the film never really presents anything that feels out of place.  (That one exception, which is entirely a personal choice – is Rebel Wilson as Fraulein Rahm.  Wilson in general just doesn’t work for me.  She’s an Australian Melissa McCarthy, dropped into films to out-crass the boys, which is a waste of their talents.)

My one minor casting quibble aside, JOJO RABBIT feels just as it should: slightly chaotic, slightly nervous, and, ultimately, more than a little hopeful.  Just like life generally is to a young child trying to find their place in the world.

Whether their imaginary friend is a racist megalomaniac or not.