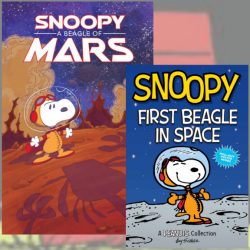 As these are newspaper strip reprints, this book is perfect for nighttime reading at any age.  A few strips or pages of strips, a few chuckles, and you’re in the right frame of mind to relax and drift off to sleep – and dream of going to the moon with Snoopy and Woodstock.  A large portion of the strips are from the early 1980s, when Schulz was in his “mid-prime” as some might say.  Before his hands started to shake, and still at that stage of writing where his pen still had some bite.

These are not the same almost subversive characters of the strips initial years, but more the polished, but not too smoothed over, over-bland strips that surrounded Peanuts in the papers.  These are the Peanuts of the 1960s and 1970s television specials.  The Peanuts that could still make you think, and still make you laugh, and still make you marvel at Schulz’ amazing cartooning.  Where Watterson amazed with detail and scope, Schulz wows with simplicity and grace, and a storytelling deftness that is nearly impossible to match.

Simply put, it’s almost impossible to go wrong with Peanuts collections, especially those from the mid-1980s or earlier.

Unfortunately, that is the challenge of writer Jason Cooper, artists Robert Pope, Vicki Scott, Hannah White, and Jewel Jackson, letterers and production artists Donna Almendrala and Bryan Stone, and editor Chris Rosa.  This is the team Boom Studios assembled to tell the story of SNOOPY: A BEAGLE OF MARS, a new graphic novel released in March.

Artist Vicki Scott tackles the prologue story of Mission (Out of) Control, a Woodstock story about the chaos going on at Mission Control while Snoopy is on his way into space.  Scott does a great job here, because with most comics, there is usually dialogue or captions to help clarify what’s happening on the page just in case.  However, without such tools, Scott conveys everything going on – and does so with great humor – quite nicely.  It’s a very nice short just before the primary story, and sort of a nod to the classic film experience of a cartoon before the feature.

The primary story, Beagle Of Mars, is very much reminiscent of the classic Bon Voyage, Charlie Brown animated feature, with a fuller story told around the simple title premise.  Astronaut Snoopy is off on an outer space adventure, and gets lost on Mars…or somewhere?

The story also dives into the relationship between Snoopy and his brother, Spike, as well as Snoopy and Charlie Brown’s relationship.  It also gives us a nice bit of time – smartly written – with psychiatrist Lucy and a couple of new characters in Spike’s world.

To tell you what happens would spoil the story, but suffice it to say Jason Cooper has clearly grown up with Schulz’ work, and serves the legend’s memory very well.  He understands these characters, and their motivations, in such a way that the story never feels like simple retreads of themes from the newspaper strips.

The book is colored and lettered nicely, using the cleaned up “Schulz” font well but maintaining a good readability which isn’t always easy when using a non-standard font.  The colors serve the story well, and pop off the page like they would from one of the classic television specials.

Sample artwork from First Beagle In Space (by Charles Schulz) and Beagle of Mars (by Robert Pope). Click for larger image.

The star of the book is Robert Pope’s art, however.  I happen to know Pope, and have followed his work for some time, and he is a master at recreating the styles of well known properties, having worked on Scooby Doo, Looney Tunes, and Powerpuff Girls, in such a way that you would never know the work was drawn by anyone other than the original animators.

With BEAGLE OF MARS, however, this book is clearly a Schulz production, but drawn by Robert Pope.  And it’s amazing.  Pope’s sense of humor comes out in the drawings, and while he is absolutely drawing to a style guide and drawing well-loved characters, subtle things like line weight and background placement/design are pure Pope.

As I said, I know Robert, so maybe I’m just used to looking out for such nuances, but it made the book all the more enjoyable for me.  It’s nice to see Boom not trying to pull the wool over on us and yes, having artists draw Schulz’ characters and tell stories he might have told, but let the artists play even just a little.  It livens the characters up even that much more.

And with a wonderful story like BEAGLE OF MARS, it makes the payoff all that much better.

Both books are available at

comic shops everywhere.  Snoopy: First Beagle in Space is also available via BOOKSHOP.ORG. The ICRVN is an affiliate of Bookshop.org and purchasing books via links from our page helps support the ICRVN and DFP.