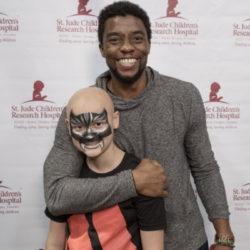 Farewell To The King

Most of the time, the death of an actor, musician, or artist makes an immediate impact on social media before slowly fading away over the course of the next day.  Such is the way of the 24-hour news cycle.

Our need for the next dopamine response, coupled with the realistically small impact celebrities have on our actual lives, means our grief is not long-lived.

Chadwick Boseman, however, will be different.

Boseman is not known or celebrated for being a South Carolina native and Howard University graduate.  Nor is he famous for being a hard-working student who worked his way to impress people able to help him in the one way Black kids from South Carolina don’t often have: financially.

Boseman is known for being a movie star.  While that may seem cynical, it is also the truth.  Boseman clearly recognized that, and taking a page from those who mentored him, made sure to use that celebrity properly.

There are several – now ironic – images of Boseman visiting children’s hospitals to cheer up young kids stricken with cancer following his debut in Captain America Civil War as Black Panther.  He was not only playing a superhero, he had become one.

Boseman was 43 years old when he died.  He lived as quiet and private a life as you can given the media circus that follows anyone headlining a Marvel franchise – as you can when you are an icon.

Boseman’s cancer diagnosis came at roughly the same time as his breakout film’s release, but even by then, he was on his way to being a legend.

In his now far too brief career, Boseman portrayed legends and icons of Black history.  Men who galvanized Black America throughout the 20th century across all walks of life.

His first major starring role in 2013 brought Jackie Robinson to life so well that Robinson’s widow said it “was like seeing Jackie again.”

A year later, Boseman shifted from sports to music bringing fellow South Carolinian James Brown to life.  Brown had transformed music by dynamically combining funk, soul, R&B, and even rock together – along with his own personality – into a singular onstage whirlwind which Boseman captured with his own dancing and singing.

In 2017, in a smaller production that is no less important, Boseman would portray Thurgood Marshall during his younger days as an NAACP lawyer.  The film was generally well received, with Boseman receiving much of the praise for his talents “driving the film.”

But the reason Chadwick Boseman’s life and death will resonate with Black America for generations to come is T’Challa.

There had been Black superheroes on screen before, but almost exclusively animated.  Black Vulcan in Super Friends comes to mind.  Blade, which some argue is the real first Marvel hero.  Storm from the X-Men franchise.

But , none of those really resonated for whatever reason.

Black Panther was a true Black film, with very few white people on the production list.  A cast and crew rich with talent, all with African heritage.  A director who clearly loved the character and what he stood for.  Source material from the modern Ta-Nehisi Coates and Brian Stelfreeze comics all the way back to Jack Kirby’s stories.

Black Panther was not “for” me.  It was for Black America, and Marvel – thankfully – embraced that.  And so did the country.  Black families treated the premiere like a family celebration, seeing the film (sometimes multiple times) in their finest clothes, all to celebrate seeing themselves on a movie screen as superheroes.

All led, all embodied, by a young Black man from South Carolina.

Black Americans had their King.  Fictional or not, they had a King and a new home in Wakanda.  Where they could be free just to be themselves without worrying about the suspicions of others.  A place where they could imagine themselves safe from being shot without provocation by police.

Chadwick Boseman understood that.  He willingly took that mantle upon himself.  He prayed for that mantle when he auditioned for the role of Black Panther.

He became the King.

And that loss will be with Black Americans, and the world, for a long, long time.