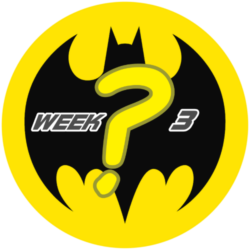 Here are the eight Bats, with their original round-of-16 ranking in parens…

And how they matched up in their “Elite Eight” pairings:

Second round voting was light but did provide a surprise, which I will get to shortly.  First, though, …what were the ICRVN picks?

So…what were the Patreon Voting results?

I didn’t have to remove my votes from any results, even though my votes resulted in an even number of voted.

Adam West was the only clean sweep, and even with my votes, the one surprise was Bruce Greenwood, who beat out Christian Bale handily.  My guess is the voice really does matter.

So that brings us to the “Best Bat Final Four”!  Patreon members at the “Early Access” levels or above will choose between the following two pairings:

(I am amazed only one live action Bat made it to this round – and it wasn’t Keaton.)

So, who will be in the last round to determine the best Bat in the Belfry?  You’re going to have to vote to make your favorite known!  And don’t forget, you can join any time up to 11pm Saturday night to get your vote in on time, and you will still get your name on the list for that 8×10 commission, so make sure you stay a Patron through the end of October!

Voting begins at 5pm, so keep a lookout for that poll and let us know who you think is the Best Batman! Until then, we’ll see you here at the same Bat-time, same Bat-site!