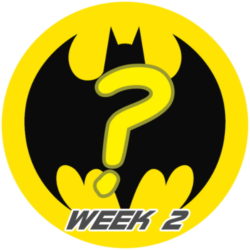 Last time on BAT-MADNESS!  Sixteen of the top Batman feature actors were pitted against each other to the favor of Patrons.  Who won?  Who lost?  Read on, faithful fans!

To recap, here were the initial 16 Bats:

And here were the initial “Sweet 16” matchups:

First round voting – much like first round viewing in the NCAA – was light, but it was pretty much as expected.  In a couple of cases, however, my vote led to a tie.  So, in those two instances, I removed my vote.  Before getting into the Patreon Voting, let me tell you what my picks were.

“Yeah, yeah that’s nice.” I hear you say. “But who did your PATRONS choose?!” They chose…

I removed my votes from the Greenwood/O’Mara and Soule/Clooney pairings to avoid ties (with my vote, there would have been an even number of votes).

Interestingly, there were only two clean sweeps, Kevin Conroy and Adam West.  I wonder if those two will be our final pairing?

Only the voters will know for sure!  Remember, if you are an “Early Access” Patron to vote between Wednesday and Saturday!  The Poll will come though to you at 5pm Wednesday.

If you are not a Patron, you can join any time – at the Early Access level or above – up to 11pm Saturday to have enough time to vote in the active poll for the week.

Also, I will be giving a random voter an 8×10 commission, so make sure you stay a Patron through the end of October!

So, what are the resulting “Elite Eight” Bat Madness matchups?  Here you go!

Starting at 5pm today (Wednesday, Sept 16th), Patrons will be able to vote, so make sure to keep a lookout for that poll and let us know your favorite Batman!

And, of course, keep a lookout for the results at the SAME BAT-TIME, on this SAME BAT-SITE!