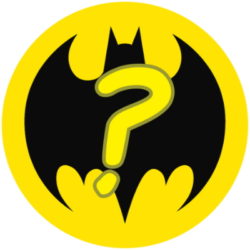 Recently a couple of sites re-posted their “Who is the Best Batman” poll, which was limited to a handful of actors to have portrayed the Caped Crusader.  They all seemed to grudgingly include Adam West and/or Kevin Conroy, mostly to round out a full eight choices, or because the editor was older than 30.

These polls have a short memory, as most folks don’t realize that Batman was the first DC hero to make the leap from comics to live-action film.  (Well, until DC acquired Captain Marvel/Shazam, then technically the 1941 serial Adventures of Captain Marvel made Shazam their first, but I digress.)

Since 1943, Batman has appeared in 13 feature films as a main character, with many more animated direct release films, and at least a dozen animated and live action television series.  Whether it is the lack of super powers that makes Batman an easier character to adapt to screen, or the colorful rogues’ gallery of villains, Batman is, and always will be, a very popular comic book character to pull from for adaptation into film and television productions.

But, can it ever be truly said which is the definitive Batman?

Obviously, personal tastes prevail in this sort of discourse, but beyond that, we’re gonna try and come up with the “Best Batman” here at the ICRVN. To begin, here are the 16 individuals who have portrayed or voiced the character since 1943:

That list was then ordered strictly by the year in which the actor first played the character.  Then the names were plugged into a randomizer, and re-ordered into a list.  Here is that list:

From that list, we produced a bracket to begin our challenge to find the definitive Batman.

Here are the pairings, in true “Sweet Sixteen” style, even with “Region” Groups:

Next Wednesday’s ICRVN will reveal the results of these pairings.

I will be writing my thoughts, and vote, for each pairing.  HOWEVER, my vote will be only ONE for the DEFINITIVE BATMAN vote.

Patrons (Specifically “Early Access”/$5 level Patrons at patreon.com/jrobertdeans) will be voting every week from Wednesday through Saturday to determine the DEFINITIVE Batman.

If you wish to vote and have your say in this contest, join the Patreon at the “Early Access/$5” level or above before Friday (so you have a day to vote), September 11!

Every Wednesday afternoon, Patrons will receive an email with a poll to vote featuring the given week’s picks.  ONLY Patrons will be allowed to vote.

But wait, did I say CONTEST?  YES!

Every voter will be entered in a chance to win a 8×10 commission of their favorite Batman character!

AND…if you REALLY want to follow along, message me your picks before Saturday every week, and the person who comes closest to picking the voting outcomes of each week most accurately will also win a 8×10 commission of their favorite Batman character! (You must use my Facebook page, or the email function of this page’s CONTACT page to message me, or if you are a Patron, message me there.)

So, join the Patreon for a chance to win some art and help pick the Definitive Batman, or just follow along and have fun debating the results in the comments (but, keep it clean, please).

Batman is a registered Trademark and Copyright of DC Comics