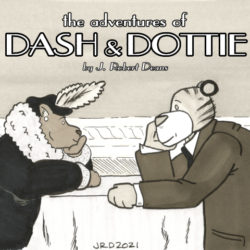 THE ADVENTURES OF DASH AND DOTTIE is a new illustrated prose series from Deans Family Productions inspired by my love of the THIN MAN series of films and the original novel that they are based on.

The series will be unlike the Shakes, Bear From AUNT, or MooseLamb books.  THE ADVENTURES OF DASH & DOTTIE is a series of short stories, somewhat inspired by the noir mystery comedy adventure films and dime novels of the 1930s and 1940s.  Further inspiration comes from the movie serial cliffhangers from the same era, and as such each DASH & DOTTIE story will be told in 12 to 15 chapters.

Each chapter will also be accompanied by a new piece of original artwork, rendered in simple lettering pen, in homage of the fantastic unsung artists of the pulp era, most of whom worked with dip pens.

DASH & DOTTIE takes place in the Grand Punwick world we have created for all of our characters, but is more of a hybrid in that it calls upon “our” history and culture as its backdrop.  The stories mostly take place on the coast, in cities that are inspired by New York, Washington, Palm Springs, and others.  Historical events from real life will frame the stories – the very first story takes place during the era of prohibition – and in some ways directly influence them.

Also within the DASH & DOTTIE stories is a direct link to one of our book series that will be revealed eventually, but eagle-eyed fans should catch it right away in the preview.  DASH is Dashiell, a private detective who when introduced lives and works in Mew York City.  (Oh, come on…just because I’m writing for an older audience doesn’t mean the puns won’t still be there!)  You will also notice that I have shamelessly named my main character after THE THIN MAN’s author, Dashiell Hammett.

Dash is a tall, distinguished looking tiger, who enjoys a good evening at a club just as much as he does a quiet evening with a good book.  Dottie, who will be introduced in the second story expected to begin in the Fall, is a lovely young Puma who enjoys an evening out as much if not more than Dash, craves the thrill of detecting, and is deceptively intelligent.

As was common in the 1930s, Dottie will be judged more by her appearance than her intellect, and at every turn possible she will surprise the males around her – all except Dash who, for all his teasing, is well aware of the amazing woman he married.

I’m only a few chapters in, but I am already enjoying this series, and am glad I started writing it.  While it’s intended for an older audience and will include slightly more mature topics, it should be on par with – say – the recent Spider-Man films in terms of age-appropriateness.  It’s probably fine for readers as young as 8, even though I am writing it for readers ages 10 and up.

Dash & Dottie stories will be posted to Patreon at Noon on Saturdays beginning March 6th.  Chapters for the first story, titled “When Murder Was In Bloom,” will post every two weeks for members at the “Behind the Scenes / Early Access” level and above.  Subsequent stories will have their chapters posted weekly at the official Patreon “Dash & Dottie” membership level.

After every two or three stories have been serialized, they will be collected in a paperback which will be printed in a format – and on paper – resembling paperbacks of the era.

But, enough about those details.  You can always check them out on Patreon, the Dash & Dottie page, or use the contact page to send me questions!

Let’s get to that opening preview, shall we?

“Grampa, tell me a story!” The young cub said excitedly as he ran to his grandfather’s favorite chair and sat down next to it.

Grandfather Dashiell smiled softly as he watched the young ball of furry energy race into the living room.  He arched an eyebrow and looked down at the young lion cub now sitting at his feet.  Dashiell nodded slightly, and asked, already knowing just what the boy was going to ask, “any story in particular, Son?”

The wide-eyed young lion nodded eagerly, his tail flipping about excitedly.  “Yes!  One of your detective stories, Grampa!  Tell me about another one of your cases, please!”

Grandfather sniffled, and thought for a second.  “Alright,” he said smiling at the cub.  He reached for his pipe, lit it, then took a drag from its mouthpiece.  Nothing came out.  Confused, Dashiell closed one eye and peered into the pipe’s barrel with the other.  “Ah,” he exclaimed under his breath, realizing the pipe was out.  Scritching at the used-up contents of the barrel with his old claw, Dashiell tapped out the old ash into an ashtray with one paw while reaching for his tobacco pouch with the other.

“A story,” Dashiell said softly several times over and over as he filled the pipe barrel with tobacco, tamping it down with his finger before lighting it with an old lighter.

The lighter was brass, and had lost its polish ages ago, giving way to a scratched, worn surface reserved for personal treasures.  The lighter was inscribed, ‘To Dash, For the fiver I always forgot, John.’  Grandfather Dashiell didn’t keep much memorabilia around from his younger days, but each one he did keep had a story behind it.

Grandfather took several long, slow drags from his pipe, and with each exhale, the smoke curled around his large head and mane before floating upwards and dissipating towards the ceiling.  Dashiell stroked his chin and beard, thinking of a tale to weave for his young grandchild.  He could sense that his grandson  – while not getting agitated – was losing himself in the anticipation.  He looked at the young lion and smiled.

Dashiell settled into his chair, took another long drag from his pipe, and as he exhaled, began his story.  “Let’s see.  Back before I met your Grandmother – say, the mid-1920s – I was having a bit of a dry spell…”

As Dashiell spoke, young Leo’s eyes widened just as his smile broadened, and he leaned closer and closer to his grandfather.

The city had become cold.  I was enjoying the autumn weather, the cool crisp mornings and the ever so slightly warm afternoons were perfect for me.  And, perfect for the type of work I did.  Running around after hoods was a lot more pleasant a task in the autumn than it was in the summer or spring.

In the winter, though, while you still had the nice cold temperatures, you also had to worry about slipping on ice or snow, and…well, let’s just say at times I could be less than graceful.

I was still working out of a small office on the east side of town – this was a few years before I had met my wife.  The country was still under Prohibition and the illegal speakeasies ran the city.  Which meant the mobs ran the city.  But, there were still plenty of honest cops trying to keep the peace.

For the most part, the cops knew that prohibition laws meant more crime between the mobs.  So, the police would focus on more important things, like actually keeping the people in the neighborhoods and boroughs safe.  Every so often the mobs would have it out, and some cops felt it was easier to let them clear each other out and clean up afterwards so long as they could keep the innocents safe.

Every so often, there were crimes or cases where the cops couldn’t get involved, for whatever reason.  For those cases…there was me.

Unfortunately for my father, I dropped out of medical school and joined the police academy, finding solving crimes far more interesting than medicine.  Once I graduated and got my badge, I found just how much work it was being an officer – especially in a city where the budget was never really as much as it was needed to help everyone who needed us.

Half of the folks who came to us for help we never could simply because the money wasn’t there, or the chief didn’t think the case was worthy of our attention, no matter how desperate the person seemed.

I couldn’t take every case, but I tried to.  And I had a policy that I charged rich clients double and poor clients next-to-nothing.  Or less.  Thankfully, I never did get a reputation for being a sucker for hard luck cases.

Read the complete Chapter One this Saturday at Noon at Patreon.com/JRobertDeans!