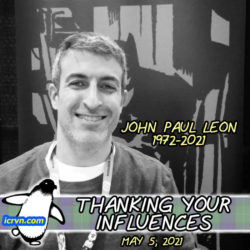 John Paul Leon, Inspiration, and the Finiteness Of Time

To say that John Paul Leon’s passing on May 2d was a blow to the comics community is an understatement.  Leon is another in a long and tragic list of amazing talent the comic book creative community has lost well before their time, including Dwayne McDuffie, Darwyn Cooke, Norman Lee, Seth Fisher, Mike Wieringo, Mike Parobeck, Dave Stevens, Michael Turner, Norm Breyfogle, Steve Lightle, Dave Hoover, Jeremy Dale…  It’s a list that would be far shorter if our society didn’t believe artists should live up to the “starving artist” stereotype, or if our society did believe in universal health care.

Another thing that Leon’s passing brought to the fore was a realization that too many of our creative brothers and sisters have passed before we could let them know just what they meant to us.  Comics are changing, and with that change comes a change in the demographics and makeup as younger artists are avoiding mainstream publishers for web-based options or self-publishing.

Young creators may know names like Ramona Fradon or Jose Garcia Luis Lopez, but it’s likely they don’t hold the same weight with today’s creators that they do my generation.  Creators of my age (late 40s/early 50s) were hit hard by Leon’s passing because he was our age, but also because he had the talent and respect of generations younger and older.

Many of my generation have since begun honoring their peers, making sure to not let their influences go unrecognized, and I am no different.

Throughout May, every weekday I will be sharing a QuickSketch of a character created by an artist I admire.  I will be sharing thanks in other posts after May, through other platforms, such as social posts when there are no QuickSketch suggestions from fans, extra artwork in my biweekly Patreon Art digests, and more.

If you are a creator of any kind, reach out to your influences and thank them.  It’s never too early, which is far better than being too late.

Please follow me on Twitter, Instagram, TikTok, or on my public Facebook page for the daily tributes to my inspirations, and consider signing up for the Artwork Digests ($2 a month on Patreon) for even more tributes. Thank you in advance.